“Bidding Up” The Commitment To Catholic Education

DARIEN—There was an excitement in the room at Woodway Country Club last night at the second Foundations in Education Spring Gala, which drew business and education leaders throughout Fairfield County.

The event lived up to its billing in an evening filled with high spirits, generous giving and a strong commitment to Catholic education.

More than 250 attended the gala that included live and silent auctions, while focusing on the transformative power of Catholic schools to change lives and lead to better futures for young people.

When the bidding was finished, the event had raised over $800,000 according to Holly Doherty-Lemoine, Executive Director of the Foundations in Education (FIE), which manages the Bishop Scholarship Fund and other programs for innovation and investment in diocesan Catholic Schools.

Many of the guests were alumni of Catholic schools including recent graduates and those who remember the “golden era” of the schools in the 1950’s.

CNBC economics commentator Larry Kudlow started the ball rolling as master of ceremonies when he said that Catholic schools not only produce great students and citizens but also “keep the faith alive and pass it on to the next generation.”

Kudlow, who is a member of the FIE board, said Catholic schools helped to save New York City during the turbulent era of the 1970’s, and continue to offer a faith-filled alternative to secular values.

Bishop Caggiano shared a personal story about the power of Catholic education in his own life. He said his father came to the U.S in 1955 as an Italian immigrant with a third grade education.

“He was a longshoreman who unloaded ships. My mother arrived two years later and had a 5th grade education, but in a few years I would be accepted as a freshman at Yale university,” he said. “I’m one of those helped by Catholic education—children from poor backgrounds who were given a future.” 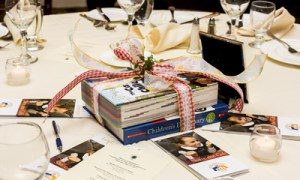 The centerpiece of the program was the awards ceremony that honored George Landegger, Sister Joan Magnetti, rscj, and Tony Pavia.

Pavia, who has had a distinguished career in education as principal at Stamford High School, Trinity Catholic High School and New Canaan High School, told the gathering he was far from a stellar student in high school.

“Truth is I wasn’t even an average student. I majored in being the class clown,” he said.

His life change dramatically in his first year at Stamford Catholic, when his father died suddenly and his mother did not have the means to continue paying the tuition. As he reluctantly prepared to transfer from the school, he was told that he had received a scholarship.

“The scholarship was a life-changing event for me. I don’t know how I got it and what someone saw in me. Being able to return to Stamford Catholic was a gift to me. Remember tonight that what you do will change lives.”

Pavia said anything good that he brought to his education leadership posts came from his experience of Catholic schools as a family where every individual life is valued and nurtured.

Business leader and philanthropist George Landegger of Ridgefield was recognized for his “vision and compassion” in helping the disadvantage and his significant personal generosity to Catholic schools in the diocese. He created 24 scholarships to Immaculate High School and 36 scholarships to St. Peter elementary school among other gifts.

In accepting the award Landegger described Catholic elementary and high schools as “a highway to college” particularly for families struggling with economic challenges.

He also praised Bishop Caggiano for his leadership in building support for Catholic schools and creating a new era in Catholic education. “We have been truly blessed to have the bishop in our midst. I has been my privilege to help and I thank you for the honor.”

“It’s really important in life what you show up for,” she said, thanking all those in attendance.

The education leader with over 30 years experience recalled that her mother often said, “Remember Joan, we all need help getting out of the womb.”

“Just 20 minutes from here is a different world,” Sister Magnetti said referring to the children served by the Catholic Academy of Bridgeport. “We have 920 students on four campuses. They need to feel the face of God and heart of Christ in their lives.”

Student speaker Joshua Alexandrino, a 7th grader at All Saints School in Norwalk, brought the house down with his poised acceptance speech and a rendition of “I don’t need anything but you,” which he reprised form his role in “Annie,” the school play performed earlier in the year.

He said he was very grateful for the Bishop’s Scholarship Fund, which has given him the opportunity to attend a Catholic school.

After dinner, the bidding started with Cardinal Shehan Center executive Terry O’Connor serving as auctioneer. Guests bid on a wide range of items from reservation at Rao’s restaurant in New York City to Breakfast for 20 with Bishop Caggiano.

Hands and ballots continued to fly up with high bids to show strong support for Catholic schools. The final “Leaders of Tomorrow” auction bolstered proceeds with scores of donors raising hands to provide full and partial scholarship at the schools.

The Mission of Foundations in Education is to support Catholic schools of the Diocese through scholarships and professional development grants in innovation and transformational leadership.

In the past year alone, the Bishop’s Scholarship Fund awarded nearly $2.3 million in aid to more than 1,240 students at diocesan elementary schools.