Foundations in Education recently announced its 2019 Honorees – recognizing generosity in support of Catholic education, excellence in teaching and corporate partners. 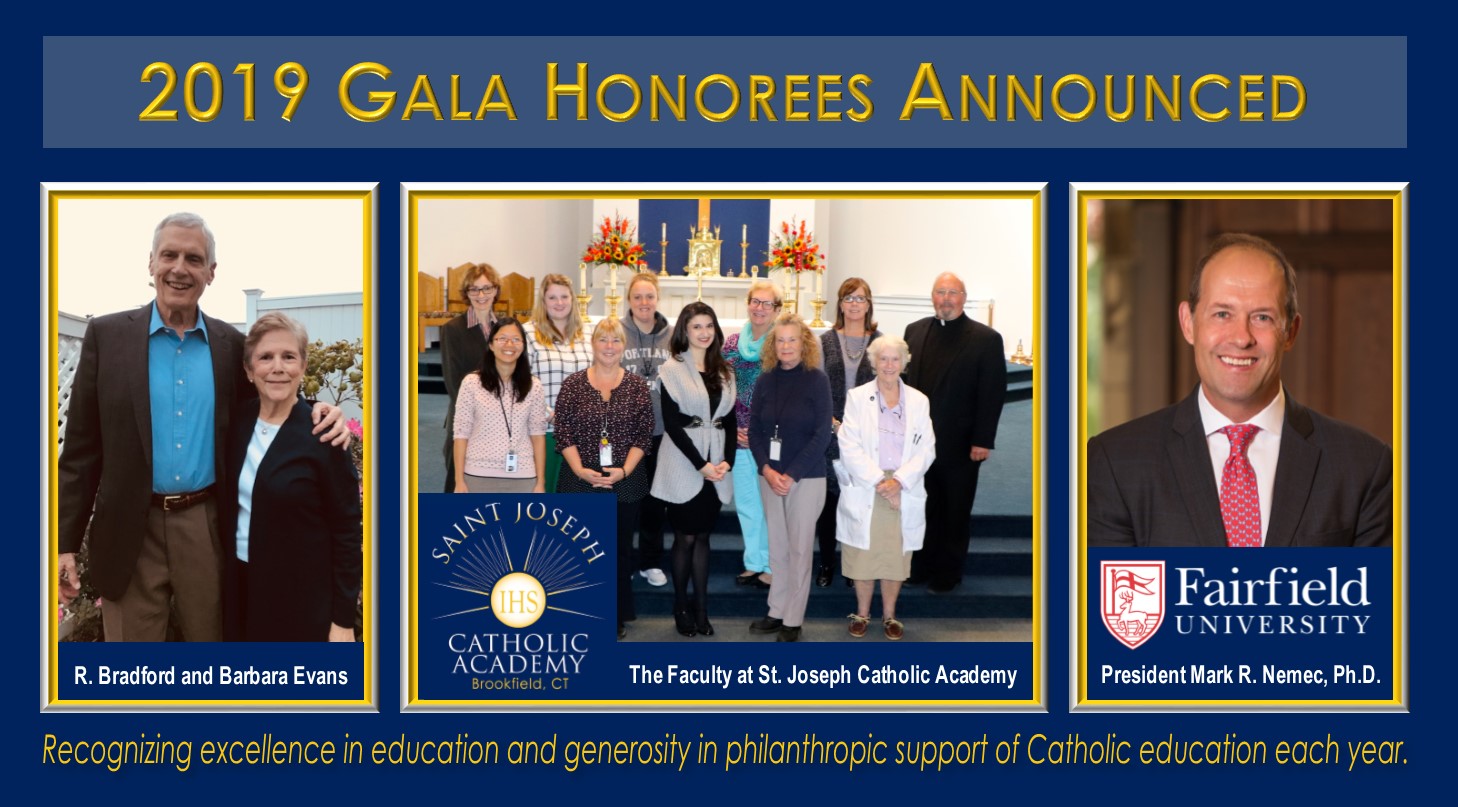 The 2019 Honorees are Barbara and R. Bradford Evans; The Faculty of St. Joseph Catholic Academy; and Fairfield University, President Mark R. Nemec, Ph.D. Foundations in Education will honor the recipients at the 4th annual Spring Gala on Thursday, April 11, 2019 at Woodway Country Club in Darien, CT.

“Each year, we have the privilege of acknowledging individuals and an organization who are true partners in our mission,” remarked Foundations in Education Executive Director Holly Doherty-Lemoine. “Our honorees have impacted thousands of children and their collective contributions may be felt across the Diocese of Bridgeport.”

Barbara and Brad Evans have long been supporters of Catholic education, both in New York and here in the Diocese of Bridgeport. Together, they tirelessly give of their time, talent and treasure to impact the lives of thousands of children. As a Senior Advisor of Morgan Stanley, Brad joined the Firm in 1970, became a Vice President in 1976, was elected a Managing Director in 1979 and a Vice Chairman of the Investment Banking Department in 2000. Brad received a Bachelor’s Degree from Dartmouth in 1964, served four years as an officer in the United States Navy and then received an MBA from Columbia Business School in 1970. He is a member of several educational boards, including the Overseers of Columbia Business School, Catholic Academy of Bridgeport, Wakeman Boys and Girls Club, and Horizons at Sacred Heart University, a summer enrichment program serving Bridgeport children. He is a former Trustee of Dartmouth College. Brad is a member of Foundations in Education’s Board of Trustees and serves on the Finance Committee. Barbara graduated from the Eliot Pearson School of Education at Tufts University in 1964 and taught elementary school for many years. She is a member of the Board of the Partnership for Inner City Education which operates six K-8 Catholic Schools in the Bronx and Harlem serving approximately 2,000 students. She is also a former board member of the Collegiate School in New York City, the Southport School in Southport, CT and Mercy Learning Center in Bridgeport, CT. Barbara and Brad reside in New York City and Southport and have been married for 48 years. They have three sons and 6 grandchildren.

The Faculty of St. Joseph Catholic Academy in Brookfield are being recognized this year as innovative orchestrators of a paradigm shift in school structure. St. Joseph’s is the first school in the Diocese to utilize the multiage classroom model school wide, where teachers act more as guides than lecturers. Multiage promotes both digital and project-based learning. Technology is utilized to ensure a highly personalized education and “real time” feedback to teachers. Teachers move from “teaching to an imaginary middle of the class” to creating learning activities that meet the needs of diverse individuals.

Fairfield University lent their expertise in working with the Office of the Superintendent on the Viability of our Schools’ Study.  Most recently, the Diocese of Bridgeport entered into a multi-year partnership with Fairfield University’s Graduate School of Education and Allied Professions (GSEAP) to integrate technology across the curriculum and address individual student learning needs. Faculty and graduate students will support professional development focused on classroom management, technical skills, course design and online teaching strategies.  An ed tech certificate program became available for diocesan teachers this summer. GSEAP will also train and certify new teachers who will work in the district and receive spiritual direction from Fairfield Center for Ignatian Spirituality as part of the new diocesan Aquinas Fellowship Program. Fairfield undergraduates enrolled in service learning courses will also have the opportunity to work in diocesan classrooms. Mark R. Nemec, Ph.D., the 9th Ignatian and first lay President of Fairfield University, will be receiving the award on behalf of the university.

The annual Spring Gala is Foundations in Education’s premier fundraising event. Gala proceeds benefit Foundations in Education, including Bishop’s Scholarship Fund and Innovation and Leadership Grants.  This year alone, Bishop’s Scholarship Fund awarded 1,380 students more than $2,500,000 in tuition assistance so they may experience transformational education based on Christian values and character formation at Catholic elementary schools throughout the Bridgeport Diocese. The Foundation also funded nineteen grants to educators in the amount of $105,000 for innovative and leadership initiatives within Diocesan Catholic schools, thus benefiting students further. 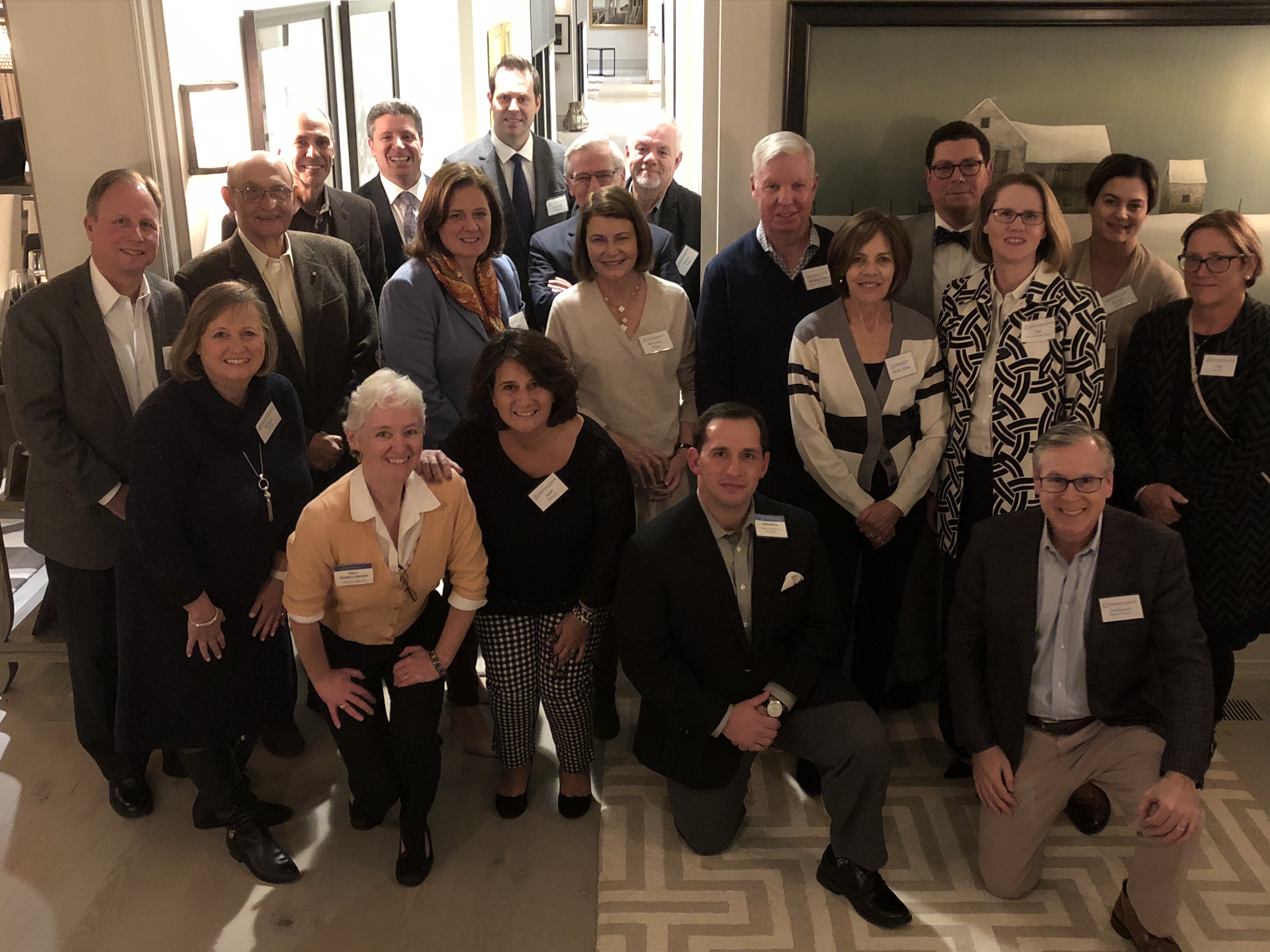 Between now and April 11, 2019, the committee will work diligently to gather sponsorships, finalize the event program, and support Catholic education in the Diocese of Bridgeport through this event.